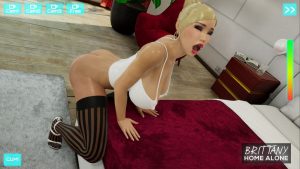 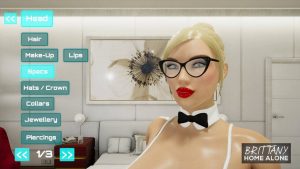 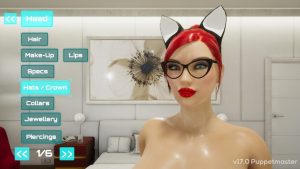 If you’re feeling lonely and want to get some company, perhaps playing with Brittany can help you have fun and forget about your issues for a while.

“Brittany Home Alone” is an eroge game created by a user known as puppetmaster3dx. Although it is categorized as an “eroge game,” it is more of a simulator. The game doesn’t follow any sort of storyline and just focuses on your interactions with the main and only character, Brittany.

“Brittany Home Alone” appeals to a very specific audience as the model is a futanari girl, a person that has a penis and a vagina simultaneously in the animated media. It is one of the few games that include futanari representation without using mods.

You’ll get personalizable options, but it doesn’t go too far. One thing that Brittany Home Alone is characterized for is its detailed models. The exceptional lighting effects make her appear more like a “real” human, although her appearance is similar to a plastic doll.

Besides that, you’ll also get to personalize Brittany’s appearance as much as you’d like. It is a good perk, but it doesn’t justify the lack of gameplay.

The biggest issue of this game is that you don’t get to control what happens to Brittany. It is all up to the game’s algorithm. It is true that the game has tons of poses and choices that you can select, but these serve as “tools” you hand Brittany, and she’ll put on a show for you. It has only a few interaction options, which many players have pointed out as the main issue behind this game.

Despite the lack of gameplay, you’ll get to enjoy what Brittany does best from all the angles you like. The game renders everything that happens in real-time, so you can play around with the camera to find the most pleasant angle based on your preferences. The camera controls aren’t too noteworthy and can present issues many times.

There isn’t that much to say about Brittany Home Alone. Yes, you’ll get a ton of personalization content, and you will be able to watch Brittany pleasuring herself in unimaginable ways, but that’s it. The player barely gets to interact with the character, which makes this game a cheaper version of a cam show – except this time, you’re watching a robot that resembles a human.

Brittany Home Alone can be an enjoyable game, but you can get bored of it after a while. You may try playing around with the customization options, but in the end, watching the futanari girl pleasure herself and having little to no interaction with her doesn’t seem too appealing for most players.