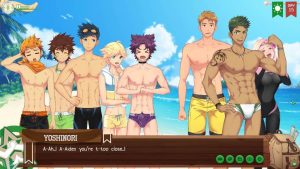 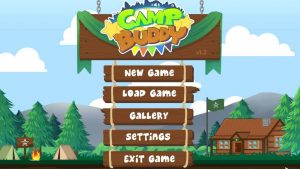 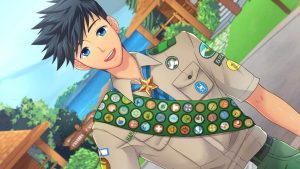 Camp Buddy is one of the most popular BL novels from this era. It has good aesthetics, an excellent story, and plenty of romance options you can choose from. If you’re not into guys, you will not find this game appealing at all – but if you do, it will definitely become one of your favorites.

The game follows the story of Keitaro, who joins Camp Buddy for the first time along with his best friend, Hiro. There were four romanceable characters during the first release, but an additional one was added after a while. Each story has a unique plotline and feels refreshing. You’ll probably come back for more after you’ve played the first one.

The game has a lot of good-looking lewd content. However, that’s not the whole focus – it also features an interesting plot about the Camp, and each character has a unique personality. Even if you don’t like them all, there are probably a couple of characters that will catch your eye. Popular elections among players include Hunter and Yoichi, for example. The other options are Natsumi, Hiro, and Taiga.

As it is usual in visual novels, your choices will affect the game. You may receive a neutral, bad, or good ending based on your decisions. It can be quite tricky at first, but you’ll get the hang of it after a while.

One thing we love about Camp Buddy is that you get what you see. The game looks as good as it does in the images you can see here – and it maintains the same aesthetic as the game progresses and you unlock sex scenes, which are animated. Each sex scene has a different context and explores different positions, so everything in the game feels refreshing and unique.

It also features a foreplay minigame where you can play around with each character’s body. It is a bit annoying as you cannot skip it to continue with the story.

There aren’t many drawbacks to this game. Plus, an expansion will be released soon under the name “Camp Buddy: Scoutmasters Season.” It will feature new stories with Yoshi, one of the scoutmasters, as the main character and will also feature mature-looking guys.

Overall, Camp Buddy is a good visual novel but doesn’t contribute with anything new. Besides the excellent aesthetics, we doubt there is something else that would make this game outstanding.