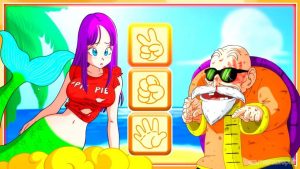 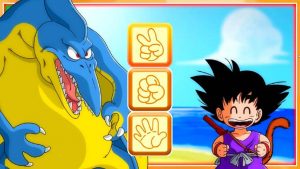 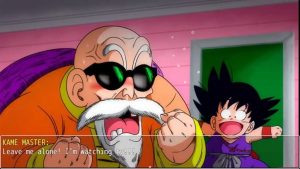 The legacy of Dragon Ball (the first series in the franchise) is still alive to this day. The game became an immediate classic after its release, leaving another 3 series (one of which is not canon) as follow-ups.

However, today we’re not going to talk about the newest installments in the DB franchise. “Kame Paradise” is set in the classic Dragon Ball world, with a few changes. As a “lewd” version of DB, you can expect what the “story” is all about!

Kame Paradise Is A must for Dragon Ball fans

We already have a few popular DB-based eroges, like Bulma Adventure. If you’ve already played that game, you’ll likely enjoy this version.

Kame Paradise has basic RPG controls and a very similar combat system to classic RPGs. You’ll play as two characters, Goku and Master Roshi. As it is common in these games, you walk through the overworld and get into fights eventually. Of course, the fights here are not the typical combats – and instead of giving you “attack, defend, item” options to choose, you’re only left with rock, paper, scissors.

Another thing that makes this game quite enjoyable is its humor. If you’re a dragon ball fan, you’ll enjoy every joke the game tells you. Although it is based on the classic Dragon Ball, you’ll still get several references to other DB eras.

At first glance, you may think that this game was made with low effort in RPG maker. Although it does have similar features, the end result is quite different and surprisingly good.

This game is aesthetically pleasing from all points of view. It doesn’t matter if you prefer the RPG aspect or the lewd scenes, as both parts are equally good. They’re pretty high quality, so you can see that the person behind the game actually put some effort into it. You’ll get to see some of the hottest Dragon Ball girls in lewd situations!

The game has many interesting points, from exploring the overworld to the “fights.” Again, if you’re a Dragon Ball fan, you’ll enjoy every moment you spend playing this game. It doesn’t take itself too seriously, and neither should you.

Kame Paradise is a fun game. It does seem like it was made with love. We recommend this game if you’re a fan of the anime – you will understand the humor, and exploring the overworld can be quite fun if you’re only doing it for the sake of lewd. However, who hasn’t at least heard about Dragon Ball at this point?

This can be an excellent game to pass the time. It’s 100% enjoyable and interesting enough to keep you hooked for several hours.